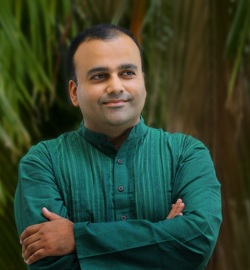 Suyog is an established harmonium player of the younger generation. He has achieved a distinct identity of his own at a very young age.

He started training in Harmonium at the age of six from Smt.Ranjana Godse. Since 1997, he has been a devoted student of the renowned harmonium soloist, accompanist and musicologist Dr. Arawind Thatte.

Suyog is a B High artist of the All India Radio and Doordarshan.  Suyog is empanelled artiste  on prestigious  I.C.C.R (Indian Council for Cultural Relation) list.

He holds a Bachelor’s degree in music from "Lalit Kala Kendra" of the University of Pune.

Suyog is on the panel of ''Lalit Kala Kendra'' (Centre for Performing Arts- Pune University) as a Guru.

As an Accompanist; Suyog uses Harmoniums specially tuned to different scales .His specialty is his precision in following the vocalist, the continuity of the notes and beautifully tuned Harmoniums. He has a deep understanding of various musical styles and musical forms. All these qualities make his accompaniment very unique, content rich and enriching to the performance.

He has performed all over India in prestigious music festivals and in countries like Switzerland, UK, Canada, USA, Australia, New Zealand, UAE , Bangladesh and Russia. In Australia he has performed at the Sydney Opera House, the prestigious WOMAD festival and the Perth Music Festival.

He is a regular accompanist at the Sawai Gandharva Music Festival in Pune.

*As a Soloist
Suyog has been specially trained as a soloist. His playing style is very melodious with clarity of notes even at high speed. He has imbibed from his Guru the technique of maintaining continuity of notes while playing. Following the footsteps of his Guru, Suyog plays “Tappa”, a very speedy intricate and rhythmic musical form.

He has performed as a soloist in Pune, Mumbai, Kolhapur, Bangalore, Indore, Banaras,Goa , Boston, Singapore. His performance has been applauded by the music critics as well as the lay listeners.

Like his Guru, it is his ambition to establish Harmonium as a Solo instrument by exploiting its optimum musical potentials.


*As a composer
Suyog has composed many bandishes in Raags like Yaman,Bhoop,Pooriya,Bhairavi,Adana,Todi etc. and uncommon Raags like Basantkali,Bhoopnat,BasantiKedar,HameerBahar,Sihendramadhyam,AdanaBahar,kedarNand,MultaniShree,Gauri etc.

He has composed Shrikrishna Bhajans,sung by Arati Thakur Kundalkar and Anand Bhate; Fountain Music Company has published this album - Harivandana.

He is recipient of prestigious “U.Bismillah Khan Yuva Puraskar” given by Sangeet Natak Academy. He has received “GaanSaraswati Kishori Amonkar Sangatkar Purskar” at the hands of Gaansaraswati Kishori Amonkar. Suyog has received ‘Pt.Givindrao Tembe Sangatkar Puraskar’ by Gandharva Mahavidyalay & ‘Pt.Bandubhaiyya Choghule Smruti Puraskar (Indore).
​
In the year 2000, he was awarded the "Rasikagrani Dattopant Deshpande Puraskar" at the hands of the veteran Harmonium exponent Pt. Appasaheb Jalgokar.   He is also the recipient of "Bapurao Ashtekar Smruti Puraskar" given by Bharat Gayan Samaj Pune, "Smt.Ranjana Godse Smruti Puraskar" given by Godse Vadyavadan Vidyalay and ‘Samwadini Sadhak Puraskar’ by National Conference for Artists.  Suyog was felicitated by the renowned singer and music composer Shankar Mahadevan at the award ceremony of Firodia Karandak.